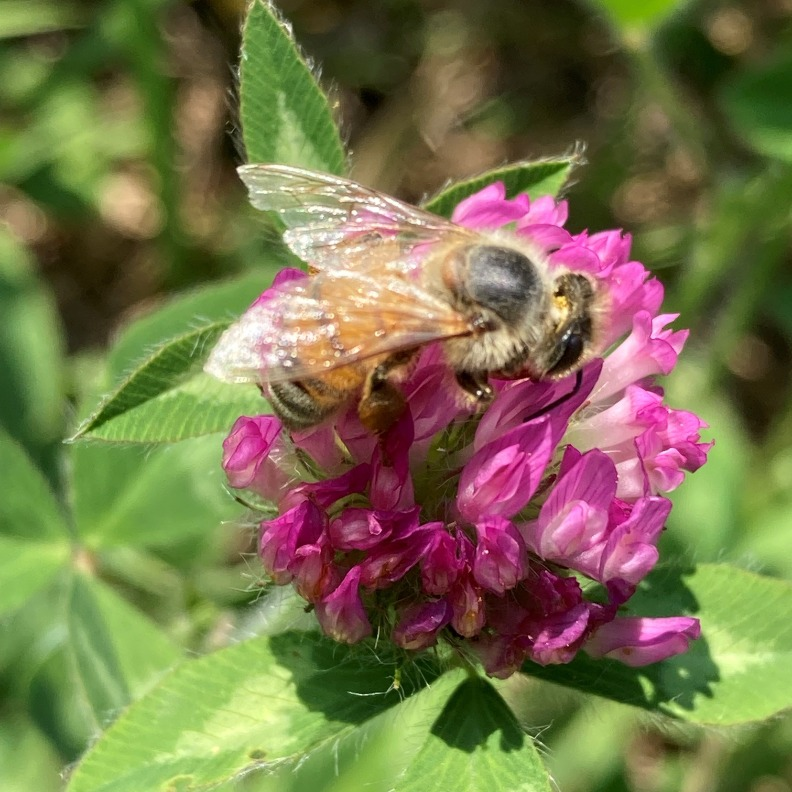 Brian Fredericksen, owner of Ames Farm, has been passionate about the outdoors since he was young. He attributes this interest in the natural environment to his grandmother Verna, who grew all her own food. Through their frequent foraging expeditions in the woods near her home, she sparked Brian’s lifelong curiosity and love of the land.

This childhood desire to spend time outdoors led Brian to dogsledding as a young adult, where he met David Bedford, the University of Minnesota horticulturalist who created Honeycrisp and Sweet Tango apples. In 1994, Brian purchased a seven-acre orchard from Bedford, which also included two beehives. “Given my grandmother’s influence, the idea of an orchard was not too scary,” said Brian. “But from the beginning, I had a lot of respect for the bees … and with time, I learned that beekeeping is both an art and a science.”

Brian explained that art and science are ingrained in the entire practice. The biology of honeybees and the plants they pollinate serve as the science, while the beekeeper provides the artistic expression. Brian’s artistic interpretation came from his early realization that the flavor of honey reflects the specific trees, shrubs or plants in bloom in a given region and season. Today, Ames Farm is a nationally recognized producer of single-source honey with 450 hives in 20 locations — and every jar they produce is labelled with its specific location, hive number and floral source, unique to a time and place in Minnesota. They are also Minnesota’s largest producer of edible honeycomb.

Like many entrepreneurial businesses, Ames Farm’s needs have changed over time as it has grown. For most of its first two decades, the farm’s “honey house” resided in repurposed facilities, including a remodeled chicken coop, garage and dairy barn. Then in 2014, Ames Farm purchased 40 additional acres of wetlands and forest near its original seven-acre location. In 2018, with financing provided by the USDA Farm Service Agency and Bremer Bank, Brian built a new honey house for Ames Farm, with living quarters for employees and space designed specifically for honey processing. And earlier this year, the business acquired property in Texas to winter their hives in a warmer climate and also raise queen bees in the spring, both for use at Ames Farm and for sale, to create a benefit that goes far beyond honey.

In recent years, Brian has become increasingly concerned about the accelerating loss of habitat for bees in Minnesota and the implications for the industry and environment. To ensure that Ames Farm will forever be maintained as pollinator land – and as a model for others – Brian is planning to place the Minnesota and Texas properties in a land trust as a pollinator refuge. He concedes that much more needs to be done, and that millions of acres need to be reclaimed for bees. “It pains me to realize that we have several generations of young people right now who have not seen the butterflies and bees I saw as a kid,” he said. “Why would they fight for something they don’t know they’ve lost?”

While Brian is clearly the heart and soul of the Ames Farm operation, he is quick to acknowledge the important contributions to his success by his faithful employees, like Marty who makes all the beeswax candles and is now in her early 80s, and members of the community. Near the top of Brian’s list are “the unsung heroes of Ames Farm” — the landowners who allow him to keep bees on their properties. “Without their support, our pollinators would not have the acres of land or access to plants, like clover and basswood trees, they need to survive,” he said. “To sustain their populations, we’re constantly looking to find new bee-friendly organic farms and wildlife areas.”

Brian also credits the local retail outlets that sell his products, such as the Twin Cities co-ops, as well as Mill City, Minneapolis, and Mound farmers’ markets — some of whom have been partners since the beginning. “Honey is a local business,” he explained. “In this digital age, the power is in person-to-person relationships. That’s what keeps our business going. Not the website or even the cool products. It’s the people.”

This personal, local connection is the principal reason that Brian was attracted to Bremer Bank and why he’s done business with the Watertown branch since the mid-1990s. “They know my name and treat me like a friend,” he said. “The quality of people who work at Bremer are people I want in my circle. They go beyond just the numbers and really try to understand my business.”

The respect is mutual. Banker Jarrod Hutchinson speaks highly of Ames Farm and Brian’s “impressive boots-on-the-ground” approach. As Ames Farm’s business has evolved, Bremer has been able to meet the farm’s wide range of operating needs, including deposit, commercial real estate, treasury management services and insurance. “Bremer’s broad expertise and personal service are a great fit for Ames Farm, enabling Brian and his team to focus on creating the sustainable impact that matters most to them,” said Jarrod.

For Ames Farm, the business of bees is much bigger than a jar of honey.