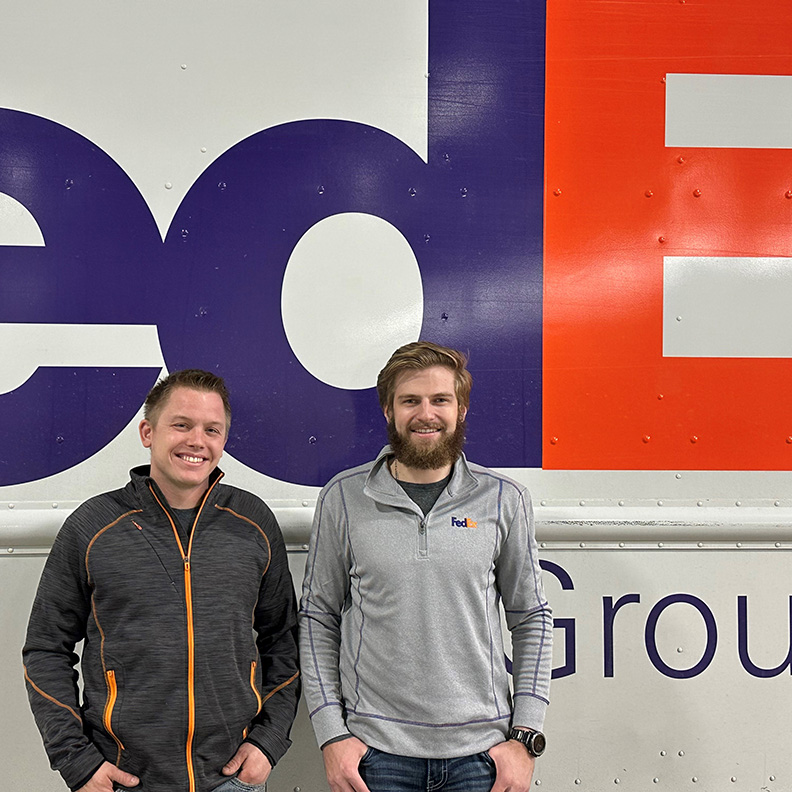 Combine ambition, entrepreneurship and a keen eye toward growth and you have the makings of a successful small business. Just ask Preston Kubas and Corey Petersen, the co-owners and driving force behind Big Green Contracting, a transportation company with a distribution center in Grand Forks, North Dakota, that delivers packages for FedEx along primarily rural routes.

Their trucks and uniforms may say FedEx, but these partners run a small, independent business that’s teamed up with Bremer Bank to make a name for itself. The duo, both in their mid-20s, were employees of Big Green prior to becoming owners. Corey was an operations manager for a farm with a mechanical background, while Preston helped manage Big Green under previous ownership.

In the spring of 2021, they approached Bremer after several other banks were unable to provide the funding that would enable them to acquire ownership of half the company (25% for each of them). Bremer not only welcomed their business, but also suggested they consider buying Big Green Contracting outright, and the original owner agreed. So Preston and Corey met with Brandi Nelson, Bremer’s head of small business administration (SBA) loans, to buy out the owner, refinance debt and begin purchasing additional trucks. In September 2021, the partners became the new owners of Big Green Contracting and hit the road running.

“After I saw the numbers, I knew we could do it,” said Corey. “Preston had significant experience working for the prior owner. And, as a farmer, I was used to working with banks. We were looking for a true banking relationship, but it was hard to get a bank to fund young owners like us.”

Bremer banker Scott Schultz saw in the duo what other banks didn’t: promise, passion and potential. “These two aren’t afraid to get their hands dirty and do the work,” Scott said. “They’re very hard workers always looking for the next opportunity. They know how to manage their money.”

Since buying the business, Corey meets regularly with Scott to review their business plans and performance. Not only are Big Green’s results on track, the company is also growing quickly – from 20 employees and an annual revenue of $1.2 million when Preston and Corey became owners, to revenue of $2.5 million and nearly 60 employees just a year later. And the company has purchased additional trucks to be able to serve even more delivery routes.

“They’re really excited about their growth,” Scott said. “They’ve already surpassed the annual sales volume they thought would be their limit. I encourage them to just keep doing what they’re doing. We’ve built a true partnership and they’re easy to work with.”

Corey echoed Scott’s sentiment. “Working with Scott has been great. He knows we’ll get back to him quickly with any information he needs. There’s so much mutual respect and we don’t hold up each other’s progress. No hemming and hawing. Just direct conversations. Scott advises us as a banker, but he’s also learned our business and adds even greater value.”

Rapid growth and success haven’t come without some challenges for Big Green. The transition from employees to owners was rocky at times for the partners, as was getting the rest of the team on board. But Preston and Corey have used their knowledge of the business and its people to their advantage.

“There are two things in this business: truck and driver,” said Preston. “Because of my past role in operations, I knew every driver quite well. I was there for them every day to answer questions, and they knew I could do the job because I had driven every one of our routes. But they also knew that Corey and I had the wherewithal to grow the business, which we’ve now proven. My weakness is Corey’s greatest strength. Anything I miss, he catches and vice versa. Our chemistry and trust are great strengths.”

With an ambitious leadership team and expansion well under way, Big Green has its sights set on the future. “The opportunities we’re getting now have never been done before in this industry,” Corey said. “If we can keep growing in the FedEx world, we will hire more managers who can become owners. We run this business expecting the same of ourselves as everyone who works with us. We live this expectation every day.”

The Big Green success story is one of determination and hustle. But these new owners also have a clear vision that they shared with Bremer. “Know where you want to go with everything you do and make it clear to potential banks,” said Corey. “Have a directive, be decisive and build relationships. It’s about the people you grow with, and we’ve grown with the help of Bremer. We’re surrounding ourselves with the most successful people we can and make success your duty. They’re all rooting for us and making us better.”