Investors have opportunities amid negative headlines

As we enter the second half of 2022, there seems to be no end to the bad news. Inflation is at its highest level in 40 years and consumer sentiment is at its lowest level in decades. During the second quarter the Dow Jones Index was down for eight straight weeks, its longest such stretch since the 1930s. Municipal bonds posted their worst six-month total return on record. The war in Ukraine is now entering its fifth month. The Federal Reserve raised rates 75 basis points at its June 15 meeting, the largest increase since 1994. A balanced portfolio of stocks and bonds is down in value more than it has been at any point since late 2008.

All of this is causing real anxiety for investors. Portfolios are down as the cost of living has gone up, and while wage growth has been robust, it has been below the level of inflation. If you own a home or a car and are looking to sell, you will likely be pleased with the price you can get. However, if you need to buy a home or a car (or almost anything else), the cost can seem prohibitive, especially with borrowing costs up.

Given all of this, it is easy to be pessimistic about investing in anything other than cash. But the recent moves in asset prices and interest rates also present some opportunities for investors.

Prior to 2022, fixed-income securities generally performed fairly well due to price appreciation as yields fell over time. In turn, coupons on new bonds got smaller and smaller over time, making it hard to live off the income produced by a bond portfolio. In fact, government debt trading with negative yields reached as high as $16 trillion in 2020, making it one of the more unusual features of the past decade.

After the increase in yields in the first half of 2022, most areas of fixed income – Treasuries, municipals, investment-grade corporates, agencies, high yield, etc. – now pay good coupons. An added benefit is that investment-grade securities, especially Treasuries, should once again be more of a diversifier against equity sell-offs instead of being highly correlated. As the chart below demonstrates, Treasury yields have risen quite substantially across the curve since year end, particularly at the two-year point, and the stock of global government debt that is currently trading with negative yields has decreased to less than $3 trillion. The second chart below shows that spreads on corporate investment-grade and high-yield bonds are back to or above historical medians, though they could increase if the economy enters a recession. Expected equity returns over the next 10 years have improved greatly

While the sell-off in equity markets has been painful, reaching bear market territory, it has likely increased the expected future return from investing in equities. After starting the year at very expensive levels, which depressed capital market expectations for equities, equity valuations on a variety of measures are now close to historical medians, which should help forward returns. This is true not only for the S&P 500 but also applies to international stocks, emerging markets and U.S. small-caps, which in some cases are even more attractive on a valuation basis than U.S. large-caps.

Valuations are looking more attractive both because prices are lower and because earnings, revenues and book values have been rising. The Federal Reserve has tools to deal with inflation

One of the reasons stock and bond markets fell in the first half of 2022 was due to surprisingly strong inflation, which exceeded even the highest forecasts made at the start of the year. The Fed has started to react strongly, raising rates 1.25% in the second quarter, with the possibility of another 0.75% rise later this month.

One of the main reasons the Fed raises interest rates when inflation is too high is to curtail demand. The Fed has little control over the supply of goods and services, which has been a contributor to excess inflation recently, but they do have ample tools to reduce demand through their control of short-term interest rates. Higher interest rates raise borrowing costs, reduce spending and incentivize savings by increasing the yield on cash, all of which decrease demand on goods and services.

We are already seeing decreasing demand in the mortgage market. The forecast for the path of short-term rates over the next decade has risen, and the Fed has announced its intention to stop buying long-term Treasuries and mortgages, both of which have caused mortgage rates to rise. Mortgage rates are now at their highest since before the 2008 financial crisis, and mortgage refinancing activity has dropped to very low levels. 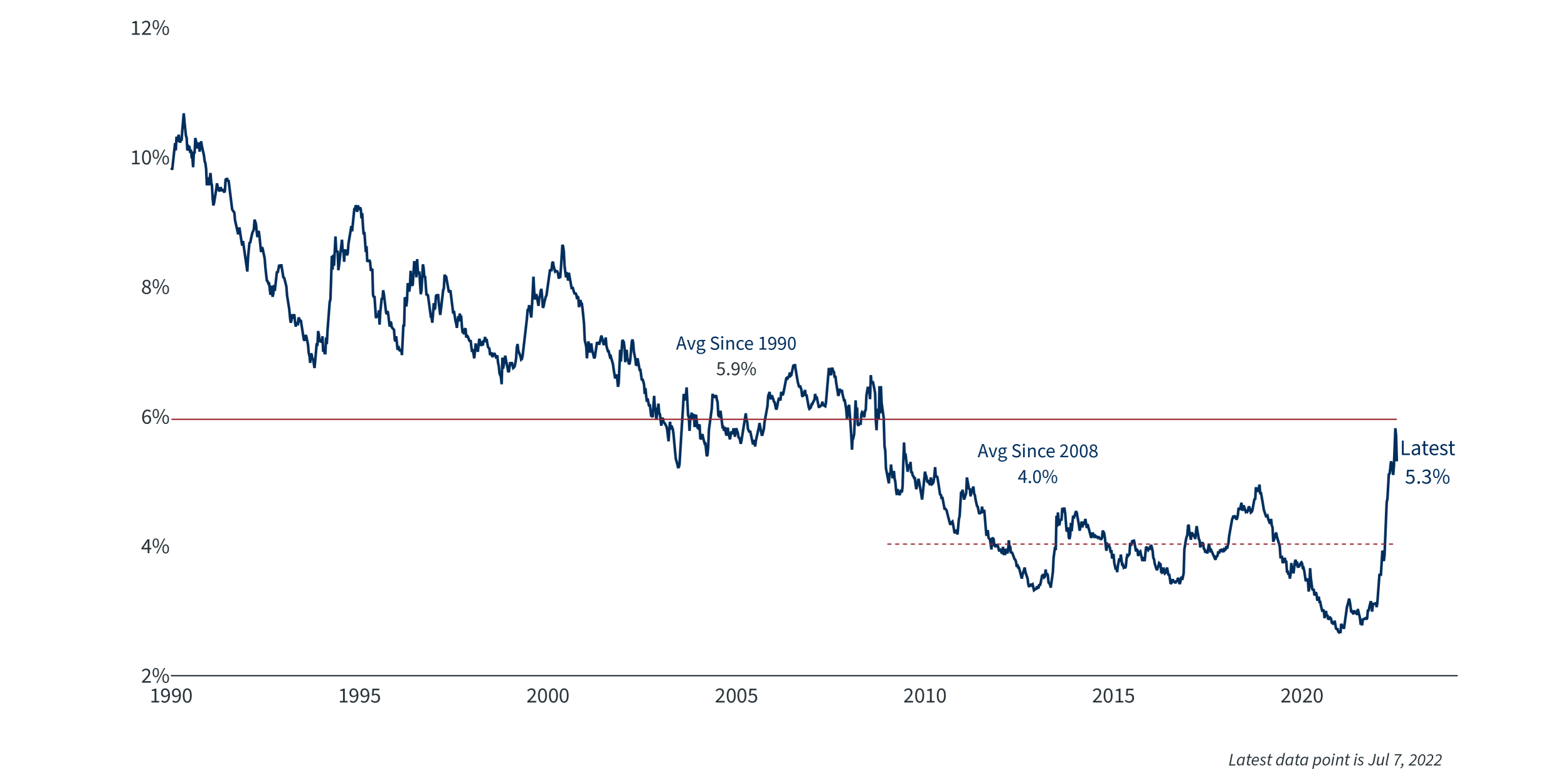 The reason the Fed has acted so aggressively over the past three months is because inflation expectations can be self-fulfilling. If individuals and businesses expect inflation to be high, they will change their behavior in ways that can cause inflation to be higher than it otherwise would be. For example, employees may demand higher wages, consumers may pull forward purchases to avoid future price increases and businesses may raise prices, which can all cause increased inflation.

Fortunately, over the past few weeks we have seen a reduction in the inflation expectations that are priced into Treasury Inflation-Protected Securities (TIPS). Both the 5[TCM1] -year breakeven and 10-year breakeven inflation rate exceeded 3% early in the second quarter, but they have now fallen to 2.7% and 2.5%, respectively – not too far above the Fed’s long-term target of 2% inflation. A similar change has occurred in consumer expectations of inflation, which have fallen in recent weeks, according to survey data. Consumers and households are in a strong position

While stocks and bonds are more attractive than they have been in a while and the Fed is being proactive on inflation, there is growing talk of recession. There is concern that the economy may enter a recession sometime in the next year or two due to rapid increases in the federal funds rate. If a recession were to occur, it may be mild. The job market is strong, consumer activity is still good and household balance sheets have ample cash. At the end of the first quarter, the Fed stated that U.S. households held $17.9 trillion in cash and cash equivalents, significantly higher than the $13.7 trillion they had just two years prior. The growth in cash occurred across all income levels and across other demographic characteristics. Household debt levels are also manageable and are well below what they were in 2008, so consumers can withstand an increase in borrowing costs. Times like these can be scary. It is tempting to want to sell everything and sit in cash until the worst is over. But it is important to avoid trying to time markets, as that creates a real risk of selling out near the bottom or staying in cash as markets rally, which can happen well before the bad news is over.

While the sell-off in the first half of the year has been painful, rising yields on equities and bonds should be applauded, because in the long run they reduce the risk that a portfolio will not produce enough income to fund ongoing cash needs (though with the tradeoff of higher mortgage rates and other borrowing costs). If you are near or in retirement, you should ensure you have properly considered your risk tolerance and avoid seeking out returns at the expense of taking on real risk. A major risk for most investors is a drawdown so large you do not have time to make up the returns in the future, which could potentially force you to adjust your lifestyle. In markets like these, the best course of action is to adhere to your financial plan, stay invested and spend prudently.

As Chief Investment Officer, Josh leads Bremer Bank’s investment strategies and all areas of asset management for our Wealth customers. Josh brings more than 20 years of financial services experience and a strong finance educational background to the Bremer team. Prior to joining Bremer, Josh spent seven years at RBC Global Asset Management in a variety of investment leadership roles. Most recently, Josh served as Director of Global Risk Management, supporting all areas of investment risk oversight, covering equities, fixed income and alternatives as well as having responsibility for derivatives risk management, liquidity risk management and ...